Home Our Blog (Escape) Velocity of Money
Share this page

Last week we introduced the interpretative challenges presented to UK and US policymakers by the unprecedented increase in household savings rates observed during the second quarter of 2020, which can be accessed here.

As a reminder, the essence of the challenge is establishing whether the savings rate rise is reflective of (involuntary saving) pent-up demand, or a sign of consumer cautiousness, and marshalling an appropriate policy response to either problem.

This week we introduce two related concepts which can help illuminate the correct policy pathway; the money supply and the velocity of circulation of money. Money supply is a more familiar term, whereas the velocity of money is less well understood. On balance we thought it worth explaining both and their relevance for policymakers.

There are several different measurements of an economy’s supply of money. The two most widely cited are known as M0 and M4.

Focussing on the money supply may seem esoteric. However, changes in an economy’s money supply are enormously consequential for macroeconomic performance and business cycles. The intellectual foundation is Monetarist theory. Monetarists believe Gross Domestic Product (GDP) of an economy increases with a rise in the money supply over the long term.

The theory also holds that inflation inevitably follows surges in money supply; facilitated by low-interest rates and quantitative easing. Therefore, monetarists aim for gradual increases in the money supply, in line with overall economic growth. It is also true to say that monetary theory has not held up well, especially in the period post the great financial crash. More about this later!

Meanwhile, Graph 1 below depicts the quarterly rate of change of the UK’s broad money supply, M4, over the last decade. The graph neatly illustrates the vast scale expansion in the UK’s broad money supply during the second quarter of 2020, due to Bank of England’s expansion of its balance sheet to help finance the government’s fiscal stimulus. The quarterly increase of 13.1% between Q1 and Q2 is the highest since the Great Recession.

Following Monetarist theory, a surge in the money supply should lead to inflationary pressures. So, after the introduction of quantitative easing, should we brace ourselves for a sustained period of soaring inflation? Not necessarily, and here is why.

The velocity of money acts as one gauge of the overall health of an economy. Higher money velocity is usually a broad indication of a healthy economy.

The velocity of money (V) is calculated by dividing the GDP of the economy by the money supply M (M). If you like maths the relationship is expressed as V = Nominal GDP/ M. If the rate is increasing, then more transactions between businesses and individuals are taking place suggesting more consumers are spending more money.

Graph 2 below helps illustrate the point. 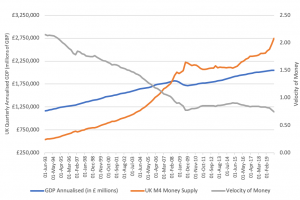 Source: Office for National Statistics, data as of the 31st March 2020

Over time overall economic growth has been positive without producing meaningful inflation, as shown in Graph 3 below, evidencing how muted inflation rates have been in the UK. 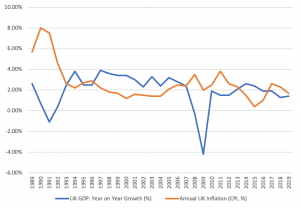 Source: Office for National Statistics, data as of the 31st December 2019

Based on the observed relationship, one could argue that sluggish money velocity is a necessary precondition for increasing the supply of money. Therefore, lower velocity partially explains the need for stimulus and contributes to the debate about why subdued inflation is prevalent despite the unprecedented expansion of the money supply by central banks.

This unusual phenomenon is not a localised problem for the UK. Other western economies are experiencing similar declines in the velocity of money and disinflationary impulses. Compounding the trend are shifts in technology, globalisation and excess debt levels in the public sector.

Policymakers remain attuned to any sign of a meaningful turn up in the velocity of money, which will bring a shift in policy. In the meantime, we can arrive at some conclusions: