In recent weeks we have written extensively about the policy responses of governments and central banks to COVID-19, both proposed and enacted. The scale of the virus’ impact warrants this attention. However, several significant themes are unfolding with the potential to have the enduring effects both here in the UK and on the global stage. Consequently, from time to time, we intersperse our communications about unfolding themes that have enduring impacts on the global stage.

Today we look at 5G and US-China relations before turning back to appraise developments underway in Europe.

5G and its links to Superpower Rivalry

Having decided to allow Chinese technology and communications company Huawei access to build out part of the UK’s 5G network, the UK Government has now reversed its position. On Tuesday the government mandated the removal of all Huawei equipment from the UK’s 5G networks by 2027.

The impetus for the quick change in stance is sanctions imposed by the Trump administration, which prevent US companies from supplying crucial technological components and chips to Huawei. Resultingly, the UK government judged the risks associated with partnering with Huawei’s in the UK’s 5G networks had manifestly increased.

There is also a whiff of suspicion that China’s recent controversial decision to change security law in Hong Kong, against the will of the people and contrary to the spirit of the 1984 Sino-British Joint Declaration, may also have been influential.

The announcement to reverse the decision on Huawei represents a victory for the Trump administration, which has been pressuring governments to remove Huawei from their telecommunications network. It will also satisfy those rebels on the Conservative backbench who were against Huawei having any involvement in the UK’s 5G network.

The proxy war over the UK’s 5G network is symptomatic of the increasingly tense relationship between the United States and China. Rising tensions between these two Great Powers are not new, and recent polling data indicates they will continue. 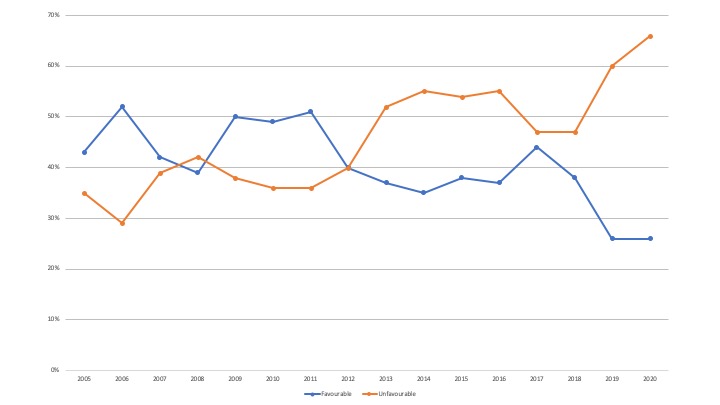 What can be observed is a definite and growing upsurge in negative views of China among US citizens, with 66% of those surveyed expressing unfavourable opinions by 2020.

It is simplistic to attribute the phenomenon depicted in Graph 1 to one US political tradition or politician. China’s rise to Superpower status is a rare bipartisan issue in the US, and Trump’s rival presidential candidate Joe Biden recently criticised the President for dealing too leniently with China.

While a change in leadership in November may engender a change in tactics, the overall strategy of inhibiting China’s rise will survive. The entire US political establishment increasingly view China as both an economic and ideological rival, as can be observed in Graph 2.

Graph 2: Views of China among US Democrats and Republicans 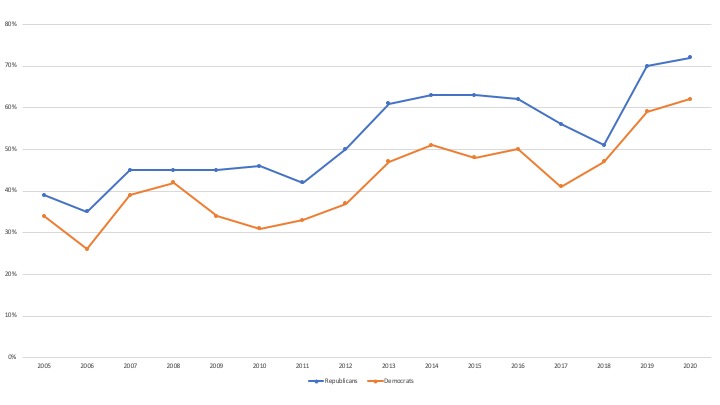 It is most unlikely the connectedness of an economic relationship built up over the last 40 years will disappear. The relationship creates value in numerous areas of trade and offers incentives for both countries to reach an accord. However, ongoing tensions are exacerbated by China standing accused by the US of acting belatedly to deal with a virus infecting the world.

To give additional perspective, a few days ago the New York Times carried an article concluding as follows:

Zhao Kejin, a professor of international relations at Tsinghua University, wrote in a recent paper. “The China-US relationship faces the most serious moment since the establishment of diplomatic relations.”

While he eschewed the idea of a new Cold War, his alternative phrasing was no more reassuring: “The new reality is China-US relations are not entering ‘a new Cold War’ but sliding into a ‘soft war.'”

What seems increasingly evident is the battleground for supremacy centres on technological leadership in key industries. In our view, the rivalry will spawn new opportunities and bring many changes for consumers and workers in the years to come, many of which will improve choice and enhance productivity.

A New Settlement for Europe

Any fair assessment of Britain’s exit from the European Union considers both the transitional costs and the opportunities open to the UK by their decision to leave. Likewise, while exacting costs on the EU, Brexit creates the chance for the remaining 27 member states to fix some of the structural issues hindering the performance of the EU economy, with the exit of the largest member state most sceptical of deepening ties.

The UK leaving the EU will produce a funding gap for European leaders to fill, which many believe will force the remaining 27 member states to fix some of the structural issues hindering the EU economy.

We recently wrote about the €750 Billion proposal from the European Commission, designed to provide relief for those European economies most impacted by the effects of COVID-19 induced shutdowns. On Friday, European leaders will meet to discuss the finer points of the recovery fund. Noises emanating from European capitals suggest a deal on Friday is possible, albeit with caveats and compromises attached.

The positive ramifications from a deal are considerable:

While vociferous opposition will emerge, the momentum for further enhancements to the EU’s economic structure is evident. If leaders can continue to grasp the initiative, a resolution of the structural inefficiencies inherent in the Eurozone may finally arrive. Creating deeply integrated relationships across the Eurozone, worth just under 20% of the global economy, will represent a significant achievement.

Meanwhile, on the UK-side, the intention is to focus on the opportunities presented to an outward-facing UK. How policymakers choose to grasp these opportunities is a topic of substantial interest that we will revisit many times. There are several different angles for consideration which are clouded by the necessary and immediate task of dealing with COVID-19. However, the capacity and scope for positive surprises are immense for economies as we move beyond the virus.